EDITOR’S NOTE: To gain a better understanding of leadership trends in the global energy sector, Pearson Partners International analyzed the education, experience, and backgrounds of 277 chief executive officers (CEOs) from the largest publicly traded US and international oil and gas companies. Here are the results of our analysis. 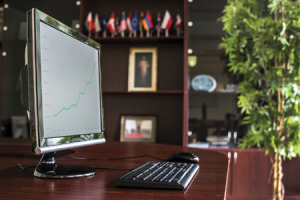 This in-depth study of oil and gas leaders resulted in several noteworthy findings, including the following:

This oil and gas market sector study included US and international public companies that met the following criteria:

Based on the above criteria, we studied 277 companies to represent a broad selection of US and international oil and gas leaders. Collectively, these CEOs manage companies that deliver more than $2.9 trillion in annual revenue and represent more than $2.7 trillion in market capitalization. In addition, they are responsible for more than 950,000 direct employees across the globe, not including contractors and consultants. 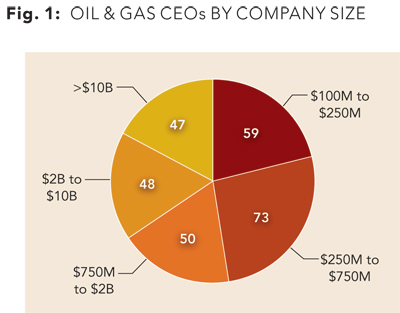 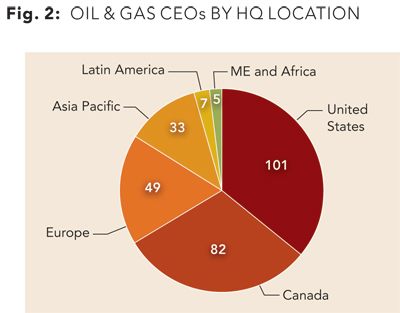 In 2013, there was an uptick in leadership changes in the oil and gas sector: 14% of these companies changed CEOs in 2013, compared with only 11% in 2012. Leadership changes occurred at several prominent companies such as EOG Resources, Marathon Oil, Chesapeake Energy, Encana, Murphy Oil, SandRidge Energy, Rosetta Resources, Bill Barrett Corp., and Royal Dutch Shell (Shell’s change was effective Jan. 1, 2014). However, many smaller companies also changed their CEOs last year. In fact, there was very little difference in CEO turnover comparing larger market cap (greater than $10 billion) companies with smaller market cap companies—14.9% and 13.9%, respectively. For comparison, the companies in the S&P 500 averaged an annual turnover rate of 11% from 2000 to 2013, according to a study by The Conference Board.

According to our study, the typical oil and gas company CEO has been in his/her role for 4.5 years. Overall, there was a wide variance in tenure (Fig 3), with about half of the CEOs having served for less than 5 years and 9% for greater than 15 years. 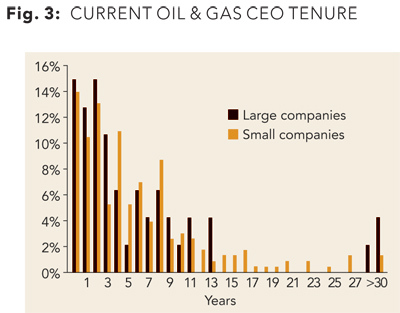 Looking at CEOs who recently left office, the result was a bi-modal distribution of tenures (Fig 4). The median of 4.8 years for this group was slightly greater than the median of the currently serving CEOs. However, there was a split between many short-serving CEOs and many long-serving CEOs, with a tenure gap in the middle. 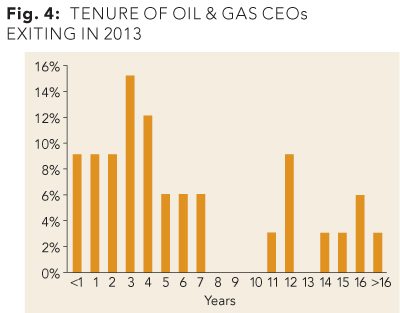 More than half (58%) of the oil and gas CEOs in our study were between the ages of 51 and 60 (Fig 5). The median age was 55, while the CEOs from the larger-market-cap companies had a median age of 58 and the median age of the smaller-company CEOs was 54. 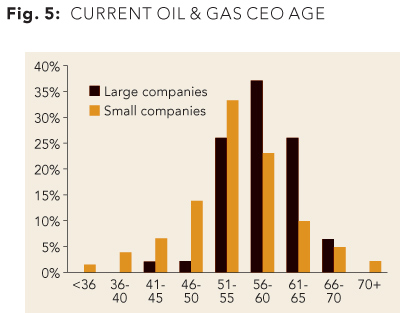 The vast majority of the CEOs in our study were promoted to CEO prior to age 56 and few became CEO at an older age (Fig 6). There was a gradual build to the peak age at which most started their current role, at 51-55 years, and subsequently a significant drop. The median age at which they started in their CEO role was 50. 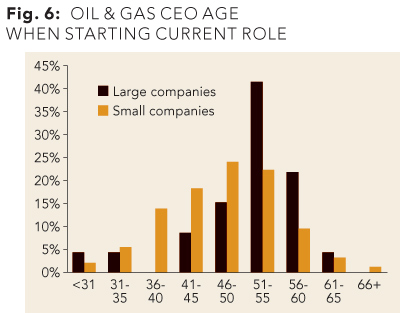 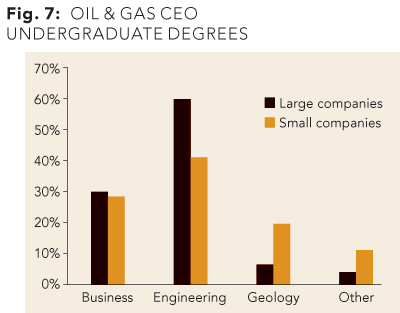 On the other hand, the larger companies in this study were a mix of fully integrated oil and gas companies as well as very large independent E&P companies. Based on the nature of these businesses, it is not surprising that almost 60% of the larger-company CEOs possessed undergraduate degrees in engineering.

As a group, these CEOs earned their undergraduate degrees from a broad mix of public and private universities. However, the seven most commonly attended universities were public universities (Fig 8). After the top seven schools identified here, no other school had a share greater than 2% of the total. 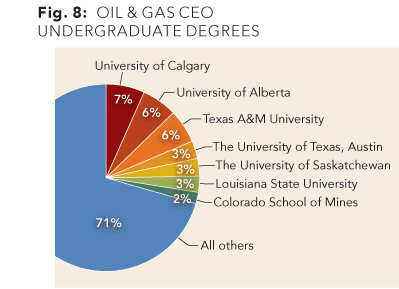 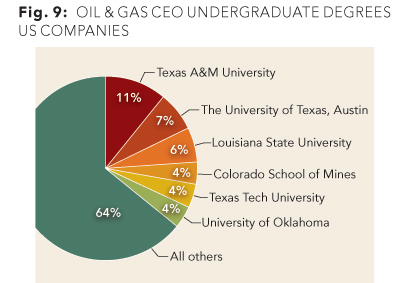 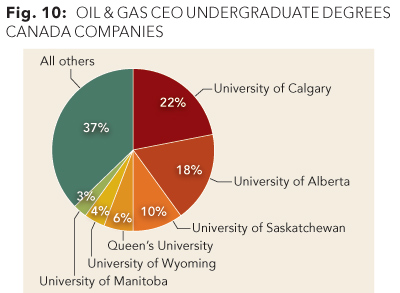 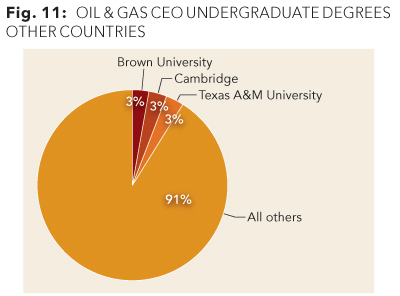 MBAs and other advanced degrees 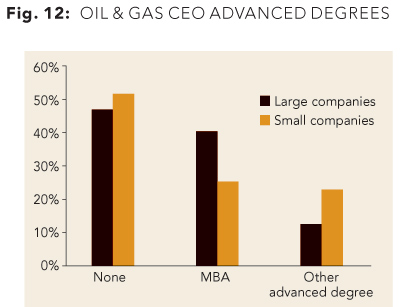 Among the CEOs with MBAs, about twice as many held engineering or geology undergraduate degrees as degrees in business (62% vs. 28.2%.) This reflects a common oil and gas CEO career path, in which a CEO initially moves up the corporate ladder through technical roles and then transitions to more commercial roles. In these cases, the MBA degree may reinforce the experience gained in the commercial roles and also equip the CEO with the tools needed to succeed as the top leader of an enterprise.

Last stop before the corner office

There was no single path these oil and gas CEOs travelled to reach their leadership positions. However, it is enlightening to look at their roles just prior to becoming the CEO at their current companies.

In general, the positions held just before the CEO role can be categorized as follows:

There were significant differences between the career paths of CEOs at larger and smaller companies (Fig 13). 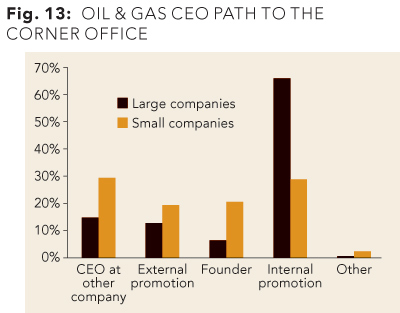 For rapidly growing companies with a smaller internal talent pool, choosing a CEO who has already successfully performed the job elsewhere is a logical choice. At larger companies, succession planning, greater stability at the management levels and a larger talent pool to draw from combine to make this option less common. Larger companies continue to recruit talented leaders at the executive level and groom them for potential leadership roles in the future.

External promotions (being promoted to CEO from a lower-level position at another company) was more common at smaller companies—19% vs. 13% at larger companies. More effective succession planning at larger companies and a greater internal talent pool make this difference understandable.

There were two common sources of CEOs promoted and recruited from other companies: 1) business unit leaders previously running a significant division as part a larger company, and 2) a functional leader at another company heading up a core function such as exploration, production, drilling, etc.

Finally, some of the CEOs of these oil and gas companies were also the founders or co-founders of their companies. This was more common with smaller companies (20%) than larger companies (6%).

In some oil and gas companies, the CEO also serves as chairman of the board, while in other companies these roles are held by two different individuals. Recently, there has been increasing debate as to whether the chairman and the CEO positions should be held by two separate individuals. While the CEO’s primary responsibility is to manage the business, the chairman’s role is to provide management oversight through the board of directors, and like all directors, represent the interests of the shareholders. Proponents of a split-governance model argue that separating the two roles strengthens the board’s independence and oversight function. Opponents of the split-governance model say that splitting the role creates inefficiencies and undermines the CEO’s authority.

As in other industries, the boards and shareholders of oil and gas companies have been wrestling with this issue, and the trend appears to be towards a split governance model. In 2013 alone, several large oil and gas companies—including Chesapeake, Hess, Marathon, Occidental, and SandRidge—separated the CEO and chairman roles. 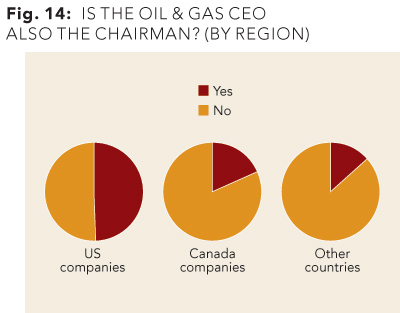 In terms of company size, 36% of the CEOs running larger oil & gas companies also served as Chairman, compared with 27% of CEOs from smaller companies (Fig 15). For comparison, about 60% of S&P 500 companies have a governance structure in which the chairman and CEO roles are held by the same individual. 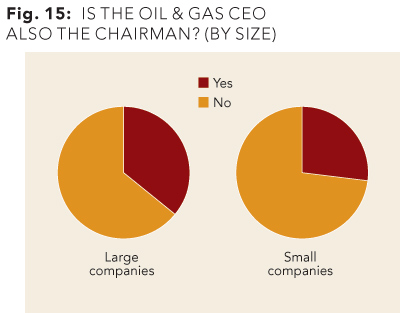 CEO leadership in the oil and gas sector, like in many other industries, remains a virtually all-male preserve. Almost 99% of the companies in this study were led by men, with only 1% led by women. As a matter of reference, 95% of the S&P 500 companies are led by men.

One possible reason for the low percentage of female CEOs in oil and gas companies is the dearth of women in the engineering field. According to a National Science Foundation study, in 2013 about 13% of all engineers were women. This is an increase from just 9% in 1993.

Coupling this with the fact that engineering is the most common path to the CEO role in oil and gas (Fig 7), it is not surprising that the oil and gas industry has fewer female CEOs than other industries.

The good news is that the number of female oil and gas CEOs is expected to increase over time due to a number of factors: an increased emphasis in recruiting qualified female executives, a larger talent pool as more women pursue engineering and earth sciences degrees, and increased mentorship for women in the energy sector.

The information included in this profile was compiled from publicly available sources such as company web sites, press releases, and financial reports. Not all data was available for every CEO. The CEOs included in this report are those that were in place as of Jan. 1, 2014.