The Future of Higher Education in North Texas 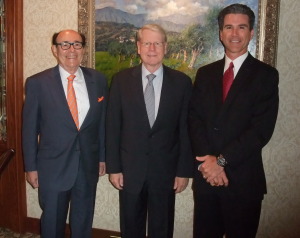 While Texas’ economy has outperformed other states despite the recession, we lag behind in critical areas: incoming research and development dollars, venture capital and the retention in-state of top high school graduates for higher education. All three of these challenges are linked to a single problem: the scarcity of Tier One research universities in Texas.

At our Q3 2014 Spotlight Series breakfast, David E. Daniel, Ph.D., president of the University of Texas at Dallas, explained why creating a top-tier research university in North Texas is critical to our area’s continued economic growth.

“The stakes could hardly be higher,” says UT Dallas President David E. Daniel. “We are missing out on opportunities to recruit top talent and federal research dollars to our city.”

The University of Texas at Dallas is a top source of talented graduates for area companies that is on track to become North Texas’ first Tier One research university. Since Daniel took the university’s helm in 2005, the UT Dallas student population has grown from 14,480 to more than 23,000. Fifty new academic programs have been added and $600 million has been invested in infrastructure and new buildings. U.S. News & World Report ranks UT Dallas as the No. 3 public university in Texas, behind UT Austin and Texas A&M.

Yet Daniel is aiming even higher: He is transforming UT Dallas into a world-class research university, creating a boon to Dallas-area businesses and the entire state.

A Tier One university in Dallas will have a tremendous influence on whether future generations of graduates—and the companies that rely on them to drive innovation—decide to work and live here.

Universities are economic engines because of the creative genius they produce. As an example of the economic impact of a single top-tier university, MIT alumni have founded 25,800 companies that employ 3.3 million people and generate $2 trillion per year in sales—equivalent to the eleventh-largest economy in the world, according to a 2009 Kauffman study. Similarly, Stanford graduates and faculty have created 39,900 companies employing 5.4 million people with annual sales of $2.7 trillion.

Texas has three AAU universities: Rice, Texas A&M and UT Austin. UT Dallas intends to become the fourth. Nationwide, America has 1.9 AAU universities per 10 million people, but Texas has only 1.2 per 10 million. By comparison, California has 2.3 (with nine AAU universities), New York has 3 (with seven) and Massachusetts has 5.7 (with three.) Among the 10 most economically productive cities in America, only one does not have an AAU university, and that is Dallas.

Texas exports 17,700 Texas high school graduates per year to four-year universities in other states, and imports only 6,000. That’s a drain of more than 11,000 of Texas’ best and brightest students every year, many of whom will go on to work—and contribute to GDP—out of state. Many are leaving for research universities that offer more advanced, hands-on education that employers are looking for, especially in medicine, engineering and science.

On Track to Tier One

In order to attract and retain higher education students, federal R&D funding and venture capital, it is imperative that Dallas have at least one AAU Tier One research university. UT Dallas expects to be a serious contender for AAU membership within five to 10 years, and to be fully capable of earning an invitation within 20 years.

The university’s Tier One initiative—spearheaded by Dr. Daniel—aims to transform UT Dallas into one of the nation’s best public research universities, deepening its resources, attracting the best students and educators, and driving innovation among area businesses. Along the way, North Texas businesses will continue to benefit from the university’s research, aggressive recruiting of top graduates and high-quality education.

Save the date for our next Spotlight SeriesSM breakfast event scheduled for December 9: An Economic Forecast for 2015 and Beyond, featuring Sean Donohue, chief executive officer, Dallas/Fort Worth (DFW) International Airport. Look for details and invitations in November. Did you miss one of our Spotlight Series events? Check out summaries of past events.

There are no upcoming events.