UT Dallas: An Economic Engine for the Region 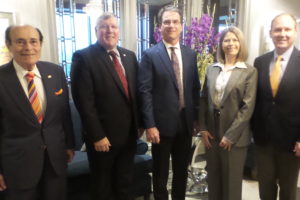 Communities that attract high-tech businesses that drive economic growth often have one thing in common: a major research university. The University of Texas at Dallas is rapidly expanding to fill that void within the Dallas/Fort Worth metroplex.

To learn how UTD is driving economic growth in North Texas region, we invited Dr. Richard C. Benson, the fifth president of The University of Texas at Dallas, to speak at our third-quarter Spotlight SeriesSM breakfast on September 11, 2018.

With a heavy focus on science, technology, engineering, arts and math (STEAM) as well as management, the university has seen enrollment grow from 10,945 in 2000 to 28,731 in 2018, and has added 11.5 million square feet of infrastructure in the last 11 years. UTD is now ranked among the top young U.S. universities, with three of its graduate programs—audiology, online business and online M.B.A.—recognized among the 10 best programs of their kind in the nation.

Of its more than 100,000 alumni, two-thirds still live and work in the Dallas-Fort Worth metroplex. The incoming freshman class today is 1,000 students stronger than the same group three years ago, and those students come with impressive potential: Their average SAT score is 1,324, 37 percent were in the top 10 percent at their high schools, and an astonishing 172 students among the 3,861 who chose UTD this year are National Merit Scholars.

Currently, Texas has just three universities recognized as economic engines by the Association of American Universities (AAU), compared to nine in California, seven in New York, four in Massachusetts and four in Pennsylvania. Based on state population, Texas should have six AAU universities.

UTD is one of eight emerging research universities in Texas, with the others being Texas Tech, University of Houston, UT Arlington, UT El Paso, UT San Antonio, the University of North Texas and Texas State University. Because DFW ranks among the nation’s 10 most productive cities, but is the only one without an AAU member, UTD has made it a goal to invest strategically in several areas to win UTD a spot on the limited AAU list of economic engines:

UTD’s Institute for Innovation and Entrepreneurship, or IIE, is also supporting entrepreneurship with the Blackstone Launch Pad, a co-working space with resources for everyone at UTD; the Venture Development Center, with 22,000 square feet of incubation space including a clean room, labs and video conference capabilities; and the UT Design Studio, an 11,500-square-foot space with workstations to support capstone projects developed by computer science and engineering students.

UTD is also growing as an economic engine through collaboration with regional educational and business organizations. For example, the Naveen Jindal School of Management collaborates extensively with the City of Richardson Economic Development Partnership, and joint degrees in biomedical engineering and science are offered in partnership with UT Southwestern Medical Center. There’s also a partnership with UT Rio Grande Valley that builds connections between the regions’ business communities and supports internships.

Such partnerships are fueling extensive research in areas as diverse as nanotechnology, biomedical engineering, mechanical engineering, and aerodynamics to support wind energy. With its growing reputation as a leading research university, funding sources are expanding. This summer, UTD received is first allocation of funding from the National Research University Fund, joining an elite group that also includes Texas Tech and the University of Houston.

UTD’s ultimate goal is to become a Tier 1 research university. To get there, the university’s long-term strategic plan supports building a nationally competitive reputation by attracting the best students, faculty and staff; securing more research funding; and creating high-impact research that draws people and companies to the DFW metroplex.