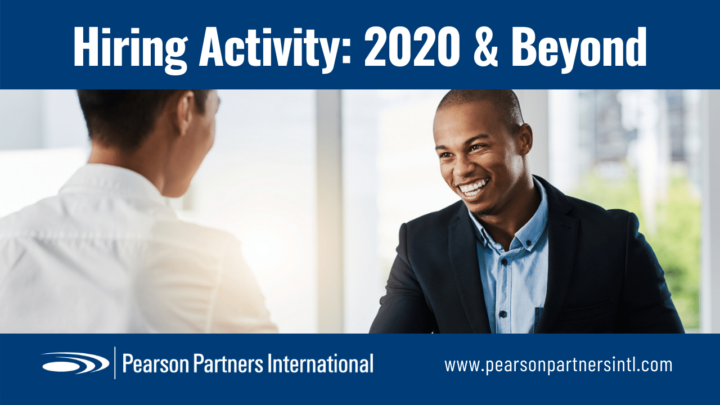 Pearson Partners International recently published a study on the business and economic impact of COVID-19. Over 500 business leaders participated from across the nation, representing companies ranging from small, private organizations to multi-national conglomerates. Along with questions about operational impact, business continuity and the economy, business leaders were asked about plans for hiring and staffing now and in the future.

Below, we summarize these business leaders’ input on hiring activity and plans in the fourth segment in our series following the study.

Capitalizing on a Slow Market

While overall hiring has slowed, some companies have taken advantage of the opportunity to add star players to their teams during the economic downturn. One CEO said, “During this economic time, I have found that great opportunity is available with talented employees who would not have been previously available.” Several business leaders reported seeing an increased need for talent. One said, “My company is growing its market share and still needs employees to get that done.” At the board level, one CEO reported, “Demand for experienced board members and advisors has increased markedly in the past two to three months.”

Over a tenth (11 percent) of respondents said that their companies plan to increase hiring in the next year. Of those, most (88 percent) said they expect to increase hiring by 10–25 percent. Respondents who reported plans to fill top positions within the next year said that they plan to hire people in customer service, executive management, engineering, information technology, marketing, public relations, risk management, legal, healthcare sales, marketing and business development. While most respondents (91 percent) did not anticipate creating any new job titles on their leadership teams as a result of the crisis, several said that existing roles will have added responsibilities.

Still, downsizing, hiring freezes and employee furloughs affected almost two-thirds (62 percent) of respondents’ companies. “We have eliminated open roles, frozen other positions and made some layoffs,” reported one CEO respondent. While many positions were eliminated, many respondents reported that their companies were still actively hiring for certain positions. One said that hiring at their organization “will remain relatively flat but, we will backfill critical roles.”

Some respondents reported mixed hiring activity, depending on the functional role. One CEO said, “We have increased hiring in customer-facing positions and placed a hiring freeze on non-essential positions.”  Another commented, “We will be building capabilities and talent in some new areas while adjusting our capacity in other areas. New hiring depends on the role and the need for specific skills in many cases.” Another said that “hiring will be partially based on client response and new technology considerations. New technology is at the forefront today, and that will build efficiencies and effectiveness. Going forward, we need to continue nurturing technical skills and delivery.”

Executives Wary of Making a Change

Many companies are still hiring and filling positions in critical roles. While hiring has slowed due to the crisis, it has not stopped and in fact, in some industries and functional areas, hiring has increased. Many companies have been able to activate business continuity plans, implement work-from-home strategies and deploy technology to get work done. Some companies have taken the opportunity to develop new products, services and business lines. For companies with the resilience to do so, this environment represents a good time to recruit and upgrade talent resources.

Read more in our full study on The Business and Economic Impact of COVID-19.