Post-Election Clarity: Opportunities and Risks in 2013 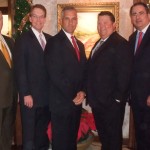 While many businesses are becoming increasingly confident and eager to move ahead, countless more remain in a holding pattern pending the resolution of the “fiscal cliff,” regulatory changes, healthcare reform and many other economic factors that complicate decision-making. At the same time, technology is moving ahead at a lightning pace, dramatically altering everything from how consumers shop to how companies create, transport and sell their goods and services.

Pearson Partners’ Q4 2012 Spotlight Series event discussed the state of America’s economy at the end of 2012, spanning everything from the fiscal crisis to the impact of technology to how employers have learned to do more with less.

The Lay of the Land

While there are a wide variety of opinions on where the economy stands at the end of 2012 and what will happen in 2013—including everything from global recession to the promise of great opportunity and the beginning of real growth—our panelists each offered their own insights into risks and opportunities in their industries in the upcoming year.

In the energy sector, domestic oil production and hydrocarbon production from shale are expected to increase. Despite regulatory uncertainty, significant economic returns will likely ensure the oil and gas industry’s long-term growth.

On the industrial side, capacity and transportation channels exist to serve demand, which is continuing to increase. Companies that took time in 2009 and 2010 to repair their balance sheets and secure cash will begin to deploy it soon, creating significant economic growth in the Midwest and throughout the United States. Industrial businesses are cautiously optimistic as their balance sheets have improved, and default rates are at historical lows—but people are reluctant to buy, sell or merge.

In Texas, expansion of the Panama Canal creates a significant opportunity for Houston and all of Texas, as passage of larger ships will make it more cost-effective to send freight through the canal to U.S. ports other than Los Angeles and Long Beach.

In the dairy business, commodities remain volatile, pending resolution of the Farm Bill and the corn crop.

Financial services companies are trying to grow their customer bases, even as they worry about pending regulations and the fiscal cliff. In banking, regulatory requirements are still a work in progress, and interest rates remain low, creating operational challenges and earnings pressure for banks along with opportunities for business borrowers to clean up their balance sheets and position themselves for success in the next two decades.

In technology, smart phones have radically changed the distribution channel, allowing consumers to decide when, where and how they want to buy products, which is driving the death of the big-box stores. Similarly, online banking is stalling construction of new bank branches, while other technological advancements are allowing equal or improved production with fewer human workers, allowing many companies that laid off workers during the financial crisis to choose not to replace them.

On the investment side, technology businesses have incredible cash flow, and there is massive investment in mobile technologies and medical devices.

As for uncertainty surrounding the fiscal cliff, many panelists expect a short-term, last-minute compromise fix, which may give businesses at least some answers to aid in decision-making. However, true clarity may have to wait for a more permanent resolution to the fiscal cliff problem, which could be many months down the road. This prolonged uncertainty may prevent some businesses from taking risks, while others continue to move ahead with growing their core businesses based on increasing confidence in the capital, bond and home mortgage markets.

In terms of human capital management, Pearson Partners sees employees boosting productivity to keep their jobs, so companies are now doing more with fewer people. Smart companies are working on developing and retaining good employees to prevent them from moving on when more jobs become available. While universities are providing skilled talent for some positions, offshore talent is still cheap, and many companies are investing in internal training programs to grow their own talent. In the leadership suite, companies need well-rounded leaders who understand and can manage all sides of the business, from finance to marketing to engineering to operations.

Tips from the Leadership Coach:
Are You a Strategic Thinker?