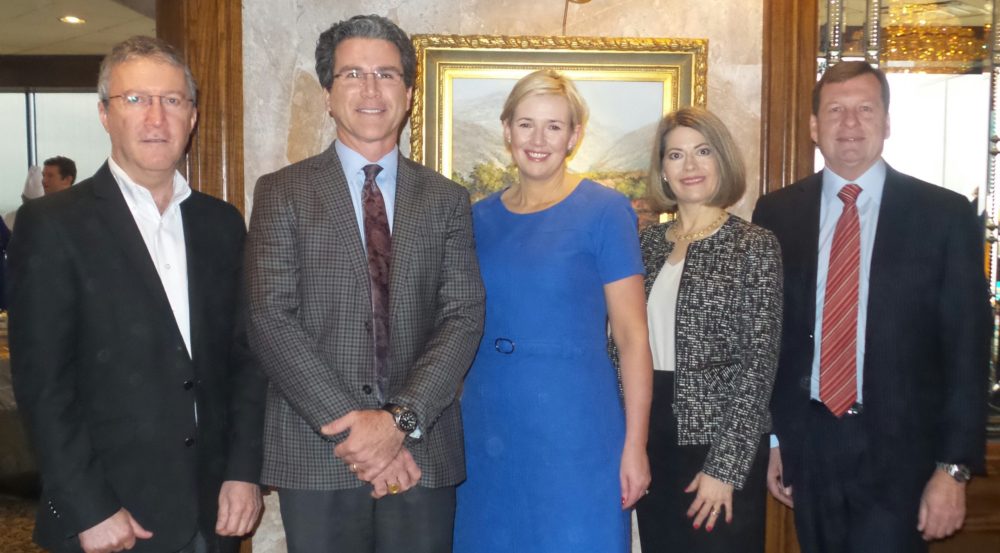 Multinational companies must be continually well informed of the varying business laws and regulations of every country in which they operate. Those with operations in the United States are paying particular attention to the proposed legislation changes coming from our new presidential administration. Such changes could have a dramatic impact on cross-border business models for these multinationals. In Pearson Partners’ Q1 2017 Spotlight SeriesSM breakfast discussion, we asked a panel of transportation, finance and search industry experts to share their thoughts on the implications of proposed policy changes on cross-border business. Our esteemed panelists included:

Proposed changes from the new Republican administration to trade agreements could have a big effect on global design and manufacturing trade, and create operating challenges, especially for the manufacturing industry.

The airline industry is a case study of the intricacies of global trade and related agreements. Because some carriers are government-subsidized, the competitive playing field is uneven. About two-thirds of global airline capacity is generated by airlines that are part of three major global alliances, which were created to navigate through ownership rules and international regulatory frameworks. Because certain airlines can only fly where their governments have negotiated treaties, such alliances offer flyers a network far broader than any single airline could offer on its own.

Multinational B2B companies tend to become even more global over time because their customers are also operating around the world. Leaders at many of these organizations say that efforts to return manufacturing to the United States could end up hurting manufacturing and business activities globally.

The common belief that returning manufacturing back to the United States will create jobs doesn’t take into account the advanced nature of today’s manufacturing. Texas Instruments (TI), for example, generates more than 85 percent of its revenue outside the United States, using a sophisticated supply chain to support global design and manufacturing. Many of its products, such as semiconductors, are shipped outside the United States to become components of other products, which are then shipped back into the U.S. market. This profitable global arrangement is not expected to change, whatever happens with U.S. trade law.

TI recently opened a wafer fabrication facility in North Texas that generates more than $2 billion in annual revenue with just four to five employees, thanks to automation. These jobs require advanced education to operate sophisticated robots and computers. The assembly-line manufacturing jobs are gone, and the retraining needed to move these displaced employees into new jobs is not included in existing trade agreements.

Many countries that voted to withdraw from the European Union are now sorting through their own uncertainties. The U.K.’s Brexit, for example, is creating uncertainty around international trade. Many elections will take place soon in France, Germany and Ireland, and until new leaders are chosen, economic negotiation is largely on hold. For all of these countries, trade with the United States is economically important. Ireland, for example, is a second home to nine of the top 10 U.S. pharma manufacturing companies and nine of the top 10 U.S. technology companies.

Disruptive technology is accelerating, rather than decelerating, causing anxiety across industries as employees worry about losing their jobs. The shift from brick-and-mortar storefronts to online retail giants such as Amazon has devastated the “mom-and-pop” shops, just as companies like Uber and Lyft are hitting traditional taxi businesses and Airbnb is shaking up the hospitality industry. Disruption’s net impact on people and jobs has overflowed into politics, and we can only expect the noise to grow louder. Bipartisan dialogue is crucial, as presidents and administrations will come and go, but countries and communities must stay bound together.

As part of one of the world’s biggest democracies, it’s important for United States businesses to embrace diversity and the opportunities it creates. Businesses need well-educated workers, and American universities produce a large, diverse pool of fresh talent from all over the world. Business leaders advocating for green cards for foreign graduates of U.S. universities could convince lawmakers to keep that intelligence here, rather than turning away U.S.-educated students who return to their home countries to compete against us.

As multinational businesses brace for changes in tax law, they continue to wrangle with tax codes and regulations of the countries in which they operate. Working with local authorities to negotiate on imports and exports requires maintaining strong government relations. On the other side of the equation, foreign governments are growing their base of ambassadors in major cities in the United States, proactively reaching out to U.S. companies to share business practices and data and secure investment in their home countries.

Should the United States attempt a tariff on imports, there’s a real possibility that other nations will respond in kind. The U.S. corporate tax rate, which is almost double the world average, already places U.S. companies at a global disadvantage. Foreign companies with a lower tax rate also gain a competitive advantage in acquisitions.

The United States is one of the only countries without a VAT (value-added tax, a national sales tax built into the cost of a product in many countries). This creates an enormous trade imbalance. One solution proposed by the current administration is a border-adjusted tax of 20 percent on all imports, combined with tax-free exports.

Ideally, lowering taxes for U.S. manufacturers could free up funds, which could help some businesses pay for higher-cost American workers rather than looking to foreign markets for labor. Such a change could shift some business back to the United States, but detractors say it wouldn’t be enough to create sweeping change in globalization trends.

Another factor that drives global competitiveness and job growth is the quality of critical infrastructure: air and sea ports, roads and bridges, and water and transportation systems. While countries such as China are gaining a competitive advantage by investing in infrastructure improvements, the United States government’s estimates for needed investment in American infrastructure are likely too low.

As the new U.S. administration focuses legislation on immigration-related issues, such as the border wall and international travel restrictions, business leaders around the world try to evaluate the potential impact of America’s shifting stance. American business leaders need to encourage their government representatives to consistently send the message that the United States is not closed for business.

Tips From the Leadership Coach:
Building a Talent Acquisition Brand