CEO Compensation: How Much is Too Much? 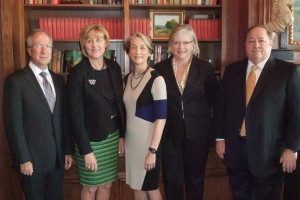 Sensational news stories often paint a sordid picture of CEO compensation, feeding the idea that pay is spiraling out of control, CEOs can set their own salaries and leaders often walk away from failing companies with huge severance packages. But the truth about CEO compensation is far more complex—and in most companies, the picture is more positive.

Determining CEO Compensation
While today’s CEOs are typically paid about three times the next-highest executive—a dramatic increase over typical CEO compensation in the 1980s—companies are larger today than ever before, and in most cases, more complex. More than ever, companies strive to remain competitive.

To design a compensation package that will attract the right CEO, companies often use compensation consultants to study their market or industry groups, typically choosing a base and bonus range that is a specific percent of the market range—and often increasing that by 50 percent or more when recruiting externally. Additionally, at least 70 percent of compensation for a typical Fortune 500 CEO comes from variable incentives such as stock options, which align CEO compensation with shareholder interests.

Many companies are implementing best practices such as compensation committees and the separation of the CEO and board chair positions in order to increase transparency and accountability. Compensation committees help evaluate a CEO’s direct contribution to the company’s financial performance (good or bad) versus general market movement or other factors. Some companies tie additional components of CEO compensation to shorter-term objectives, such as one-year cost reduction.

Perception vs. Reality
Much of the confusion surrounding media reports of outrageous compensation stems from what looks like extreme stock grants in the beginning, and later in cases where things don’t go as planned, huge severance packages.

The average tenure of today’s CEO is three to six years, and too many companies do not focus effectively on succession planning, which can help keep CEO compensation costs from spiraling out of control. Furthermore, attracting a star CEO from another company often requires the promise of a severance package at the outset, should something go awry once the CEO is on board. This is especially true in the high-stakes private equity realm. These agreements are made when times are good, but when things go bad, it can result in negative news reports of a CEO walking away from a failing company with a huge paycheck.

The Clearer Picture
While there are approximately 250,000 CEOs in the United States, only about one in a thousand makes headlines because of their out-of-the-norm levels of compensation. Taking those outliers out of the equation, most CEOs actually see less than a one percent pay increase annually.

Being open and transparent with employees about executive compensation—and rewarding employees for their own performance—contributes to a positive company culture.

Mark your calendars now for our next Spotlight SeriesSM breakfast event scheduled for September 9, 2014. Look for details and invitations in August. Did you miss one of our Spotlight SeriesSM events? Check out summaries of past events.

CEO Compensation: How Much is Too Much?

Tips from the Leadership Coach: Decision-Making at the Top

DFW HR Roundtable:
Make Waves: Be the One to Start Change at Work and In Life