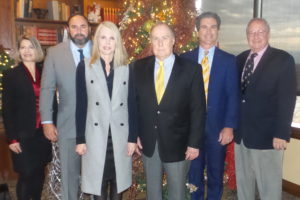 If there were three words that best describe 2017, they would be: disruption, rollercoaster and change. This year’s biggest headlines featured high-profile mergers and moves, positive stock market trends, proposed tax reform legislation, big impacts from social media, unprecedented cyber security threats, fires and storms, and America’s worst mass shootings to date. After a year like that, what can we expect in 2018?
At our Spotlight SeriesSM breakfast on December 5, our panel of future-thinkers explored how today’s trends might—or might not—shift and change as we head into the new year. Our esteemed panel members included:

Much of the discussion at this quarter’s Spotlight Series breakfast centered on the impact of the then-pending tax reform legislation. One big question was, “If the tax cuts go through, how will companies spend their newfound cash?”

Composed of an amalgam of political interests, the current tax bill has contradictory aspects. On the demand side are individual rate cuts. On the supply side are corporate rate reductions and cash repatriation. Some provisions, such as rate cuts and incentivized cash repatriation, may have market-accelerating effects. But then, there is the deficit impact, predicted to be an increase of about $1.5 trillion, which is likely to have an impact on foreign exchange.

In this late-cycle economy, the supply side may come out strongest and could push the current economy down the road and give it a longer run. If the market-accelerating forces are more powerful, companies could decide to invest all of the cash to increase productivity and share repurchases to support stock prices.

Industries that need to innovate to survive and grow revenue, such as retail, will likely invest discretionary money in automation to improve interactions with customers and achieve operational efficiencies, controls to better predict and anticipate customer behavior, and tools to help management make better operational and strategic decisions. In industries experiencing consolidation, such as industrial products and automation, expect the newly freed money to be spent on acquisitions. Some companies will also use the cash infusion for share buybacks and dividends.

For lower-level earners, the tax benefit will not be as good as advertised, and will become a net burden over time. At the same time, companies that invest in automation and analytics will reduce the number of available jobs—especially jobs that don’t require a high level of training. Digital transformation creates skilled technology jobs, but doesn’t benefit lower-income workers.

Another topic of discussion was oil prices. Two years ago, oil was trading at about $26, and today, it’s closing at about $57. The market appears to have rebalanced. Shale producers can turn a profit even when prices are low, leading to record production of oil and gas to the tune of about 9.6 million barrels per day. Global demand is growing, helping to keep prices high. With these factors in mind, our panelists predict oil prices to remain largely stable in 2018.

The United States’ goal is no longer energy independence, but global energy dominance. Globally, America ranks No. 3 in both oil and coal production, and is No. 1 in natural gas, nuclear and renewables. We export 1.5 million barrels of refined product and more than a million barrels of crude oil every day. In 2018 and beyond, America is poised to become more of a global player in both the oil and gas markets.

We are in the early stages of a new digital era, which is leading to a profound digital transformation of the economy. This sea change will eradicate jurisdictions, boundaries and borders, and is slowly creating a new economy that will replace the economic structures built up in recent decades.

Social media has connected people through technologies such as Snapchat, Facebook, Twitter and Instagram, but a new sort of network is emerging that connects living networks to autonomous networks. Objects in the physical world are beginning to report data (the Internet of Things, or IoT), and those networks are increasingly conversing with each other and with their human operators. Machine learning and natural language processing, combined with cheap sensors that monitor environments and human activities, are creating an unprecedented amount of usable information. This new digital age will continue to offer enormous opportunities for creating business value.

However, cyber security will continue to be a big issue, and in light of recent hacks such as the Equifax breach, can no longer be considered a discretionary investment.

The Trump administration’s focus on deregulation is likely to have a long-term impact on the business environment. From federal judges to the executive level within government agencies, many appointments have yet to be made, but business people are anticipating a much more business-friendly regulatory environment.

What will happen to the stock market in 2018 is anyone’s guess, but the current market success is largely driven by low interest rates. Our panelists predict modest increases in 2018 as the markets mature, foreign investment in the U.S. grows and tax policy changes.

As 2017 draws to a close, we think back on our three words: disruption, rollercoaster and change. With tax reform on the horizon, a stable oil market and the evolving technology of the Internet of Things, 2018 is primed to be an interesting year. We look forward to next December, when we might summarize the year with its own descriptors.

Pearson in the Community:
A Holiday Tribute 2017