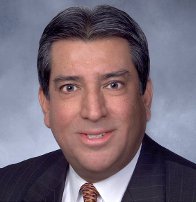 Estrada Hinojosa and Co., Inc. and member of Pearson Partners’ Board of Advisors

As featured in our Q1 2012 Searchlight newsletter

What was your first job, and what was it like?

I delivered newspapers in the morning in my neighborhood. It taught me at a young age about responsibility and the value of hard work to make money. But I hated getting up so early!

What are some highlights of your career so far?
I reached my 20th year in business in January 2012. I opened an office on Park Avenue in New York in 2011, bringing our total to nine offices.

In 1989, I worked in the Office of Presidential Personnel in the White House. All the White House cabinet positions are appointments, usually recommended by the presidential personnel team. These are important positions because they are the people making and affecting policy. I had had a long history of working with George H. W. Bush, beginning in 1970 when he ran for the Texas Senate and I worked on his campaign. In 1988, when he was elected president, he asked me to work on his transition staff, and later, I was asked to stay on permanently as special assistant to the president. My office was right across the driveway from the West Wing, and I walked over there several times a day.

We identified and recruited agency people for the Department of Justice, the Treasury and regulatory entities such as the Securities and Exchange Commission, Federal Communications Commission and Federal Trade Commission. We sifted through thousands of resumes, interviewed candidates and did reference checks. One of my first recommended appointments was Mary Shapiro, who was nominated by Bush to the SEC. She is the Chairman of the SEC today.

It was a very interesting time to be in government. During a change in administration, there is an urgency to fill the seats that are being vacated as the previous administration moves out. It’s very similar to the challenges Pearson Partners faces with their searches. Finding the right person to lead a company is similar to finding the right person to lead a major government agency.

Another of my career highlights was being named by Hispanic Business magazine as one of the 100 Most Influential Hispanics in America in 1989, and again in 2005.

What brought you to Pearson Partners?
I first met Bob through my wife, Cathy, who served on the board of the Ronald McDonald House in Dallas with Bob’s wife, Norma. At a fundraising event, I sat next to Bob, and I was really impressed with what he told me about Pearson Partners. I was eager to take on a role where I could provide counsel to the firm. It’s quite unique for a search firm to have a board of advisors, and it’s a differentiator that I think really gives Pearson’s clients an advantage.

Describe your leadership style.
I am not overly demanding. I prefer to lead by example.

What is your philosophy or approach when it comes to client relationships?
Relationships are vital to my business. There are a lot of providers in my space, and we’re competing with big Wall Street firms. A city can chose anyone from those big firms. We all have pretty much the same credentials and qualifications, but relationships are really what make the difference. We do a lot of repeat business, and that’s what keeps us growing.

How have you seen PPI grow and change over your tenure?
The last few years have been a huge challenge for executive search firms, and some have weathered the storm better than others. I have tremendous respect for the way Pearson Partners has made it work. They didn’t do layoffs. They kept the family together, and kept strong talent around the table. Now that the economy is coming back, they don’t have to go out and rebuild their team. That’s commendable, and I’ve really enjoyed being a part of it.

How has today’s challenging job market affected PPI’s business? How has the company adapted?
I have seen Pearson Partners work through periods of economic upswing and downturn, and the firm continues to thrive. I think the key to their success is their business model built on client and candidate relationships, and also treating their team well so their people are passionate about what they do.

What do you think is the key to PPI’s repeat business with top companies? What do we do better than anyone else?
I believe success breeds success. Placing good people in key positions ensures more business.

What do you like to do outside of the office? What are your hobbies or passions?
I enjoy traveling, spending time with my family and college football.

What motto do you live by?
You call, I haul!

If you had to make a career change tomorrow, what job would you choose, and why?
I would be a college professor. I have never thought about doing anything other than what I’m doing now, but my seven years on the University of Texas Board of Regents really gave me a great respect for higher education. If young people get that higher education, they gain the opportunity to have a lifetime of success. I have spent a lot of time mentoring young people, giving them guidance and advice regarding their education and career plans and helping to point them in the right direction. I have really enjoyed it.

“Pearson Partners was incredibly well prepared for our initial meetings,” said Bowe. “The work they did even before they had the search showed us how hard they would work right out of the gate to find our new CEO....
David Bowe, Board MemberDallas Lighthouse for the Blind
“When I reached out to Pearson Partners, Renee Arrington and Lisa Thompson were in my office within 48 hours. It was unbelievable. They put my mind at ease about what the process would look like. They were in constant...
Jan Edgar Langbein, Chief Executive OfficerGenesis Women's Shelter and Support
“Pearson Partners really takes the time to get to know their candidates and the companies they work with. As a candidate, I felt very supported by Lisa and Renee, and I could feel they wanted to make sure I...
Maria MacMullin, Senior Director of Major GiftsGenesis Women's Shelter and Support
"Going into the second interview, I asked Pearson Partners for coaching and got some really good insight and valuable feedback. As an executive search firm, they know how to treat you."
Nicole Fontayne-Bárdowell, EVP AdministrationDallas Area Rapid Transit (DART)
“The Pearson team was extremely responsive. They worked hard to understand what we needed in our HR department. Lisa and her team were always available and responsive, and they provided top candidates. They took the time to understand our...
C. Jedson Nau, SVP & General CounselThe Rosewood Corporation
“Renee and Lisa really took the time to seek our input. They both absolutely hit the nail on the head in terms of prioritizing the skills and traits we were looking for. I know that everybody involved in the...
Caren Shiozaki, Chairman of the BoardSociety for Information Management (SIM)
"Pearson Partners understands the private equity business very well, and the cultural attributes that go hand-in-hand with that. They were in tune with our need for this person to both fit internally and interact positively with our portfolio companies....
Christopher Ray, Sr Mng PartnerNatural Gas Partners
“Stephen was responsive and focused. He clearly took the search personally; he was more than just ‘doing the job.’ He gave me advice, kept me up to date and guided me through the search.
Gary Swidler, CFOMatch Group
© 2020 Pearson Partners International. ALL RIGHTS RESERVED.
Privacy Policy