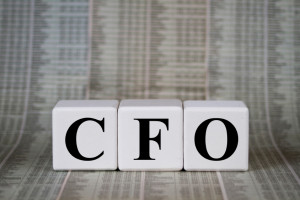 CFOs Weigh in on C-suite Trends and the 2016 Outlook

Pearson Partners International recently surveyed chief financial officers on a broad selection of topics related to their key role in the C-suite.

The survey drew responses from 180 CFO respondents representing a diverse group of North American companies ranging in size from $50 million regionals to Fortune 1000 multinationals. Below are highlights of the findings, along with some comparisons with those of our 2013 study.

[Note: Percentages in charts may not add up to 100% due to rounding and/or allowed multiple selections.] 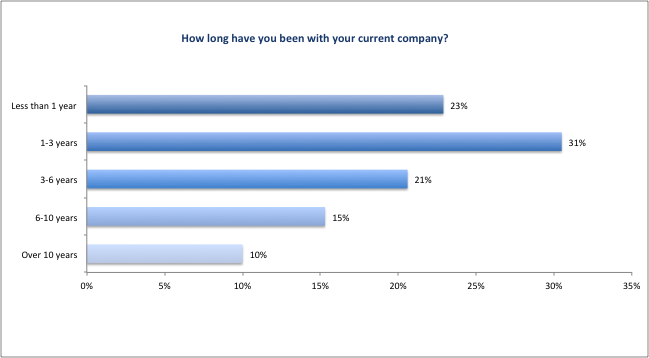 Most (72 percent) of the CFOs felt that the GDP would be either flat or only up slightly over the next year. Only 2 percent saw the GDP declining significantly. While this outlook is less optimistic than that of our 2013 respondents, it is still encouraging for 2016. On the positive front, 80 percent of respondents felt the economy would not fall into a recession in 2016, while 20 percent felt it would. Regarding the inflation rate for 2016, 37 percent felt it would end the year at less than 1 percent, whereas almost half (47 percent) felt inflation would finish between 1 percent and 2 percent. There seems to be little concern over inflation among our CFO respondents. This might indicate that the Federal Reserve will not raise rates more than once in 2016. 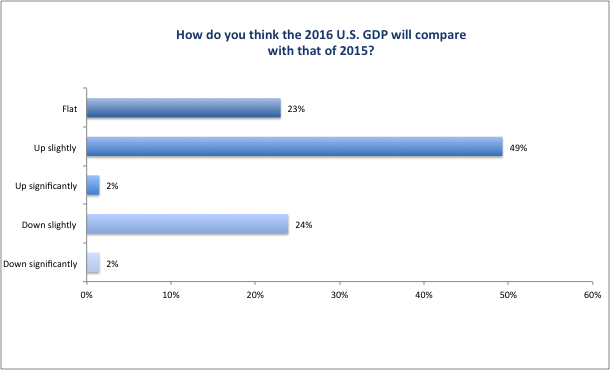 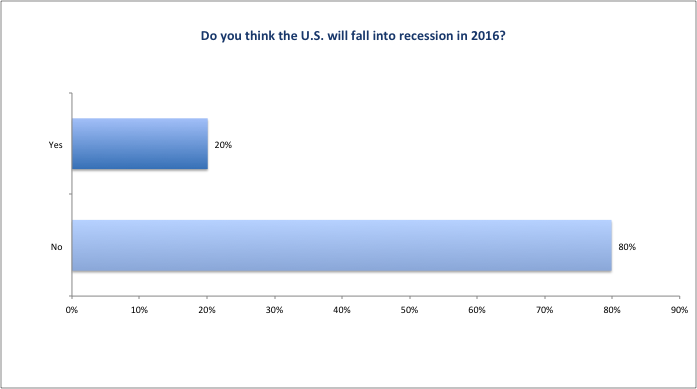 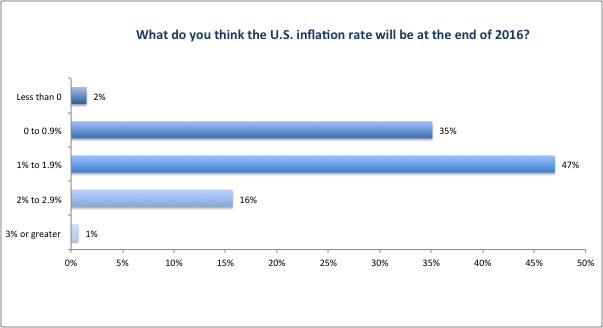 Somewhat surprisingly, while about half (51 percent) saw the S&P index as finishing 2016 either flat or up slightly over 2015, almost the same number (46 percent) saw the index winding down some or significantly. This seems to indicate that the respondents feel stocks are likely the right place to be in 2016, with a moderate allocation. In fact, when asked where the CFO respondents would invest $1.0 million today, about 76 percent selected equities, 19 percent bonds and 24 percent cash. This seems to indicate the CFO respondents are comfortable with a somewhat aggressive allocation despite this time of uncertainty. 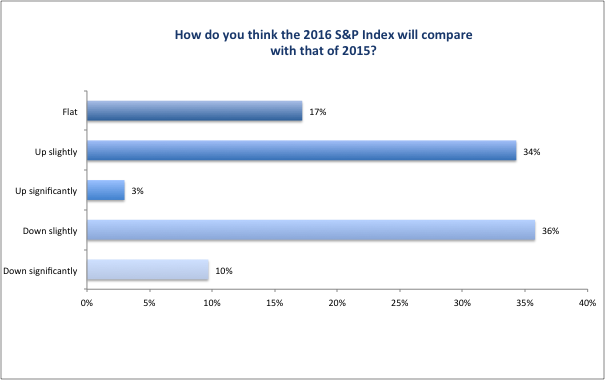 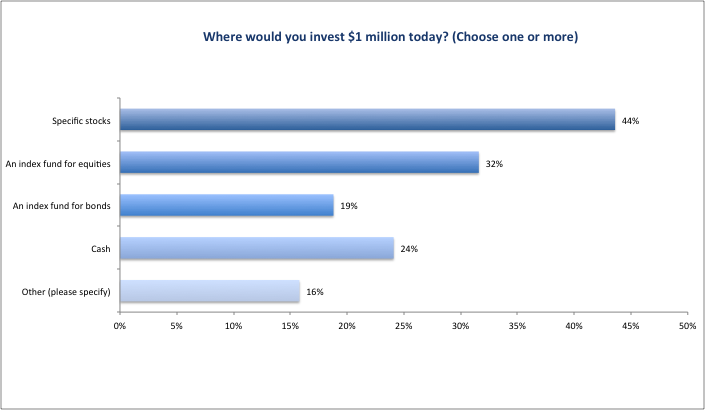 With respect to financing activity for their respective businesses in 2016, about 43 percent of our CFO respondents said they intend to raise capital in 2016. 57 percent of our respondents saw no need to raise new capital. Of those that did intend to raise capital for their businesses, 51 percent intended to issue debt securities, and 42 percent intended to use equity. These intentions are somewhat surprising in today’s climate of zero-percent interest rates and the current negative receptivity for raising new debt or equity. 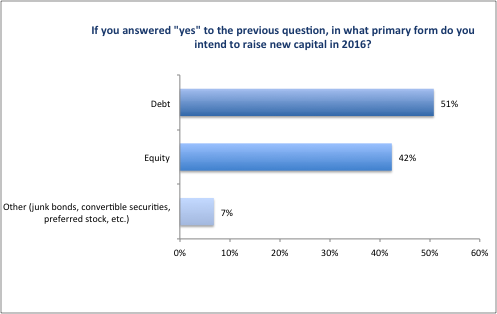 Almost a quarter (23 percent) of respondents indicated that they plan to hire more employees over the next six months than during the same period last year, which is good news for recruiting firms. About a quarter (26 percent) said their companies’ hiring plans would remain about the same and 38 percent indicated they would hire fewer employees. The vast majority (86 percent) of the CFO respondents were recruited from outside their companies rather than being promoted from within, indicating that companies are seeking CFOs with varied exposures and experiences. 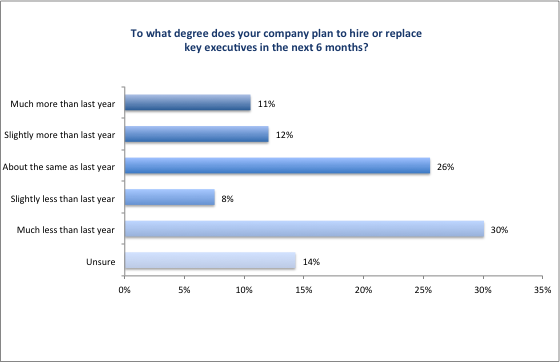 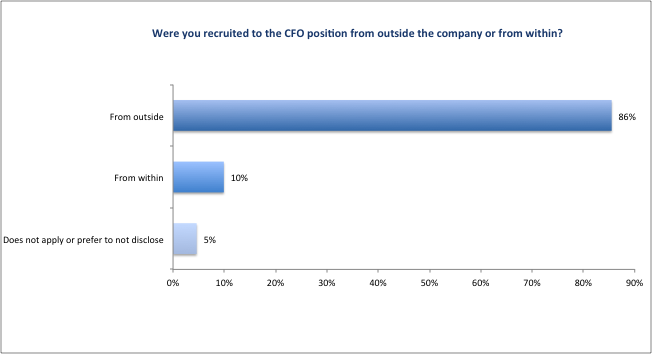 Almost 40 percent of our CFO respondents said they consider themselves a diverse candidate in terms of recruiting. This indicates that CFOs are an even more attractive group to recruit from for executive and board searches. 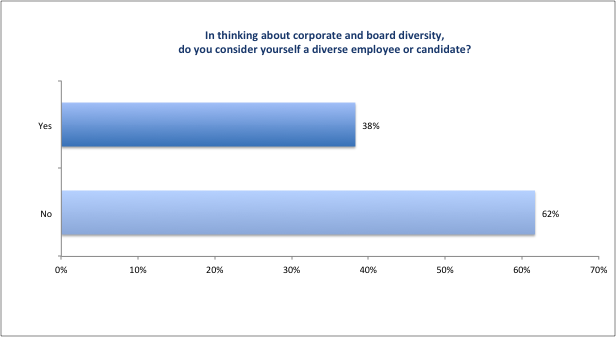 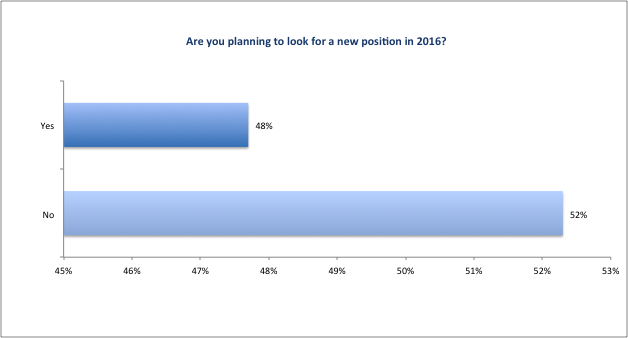 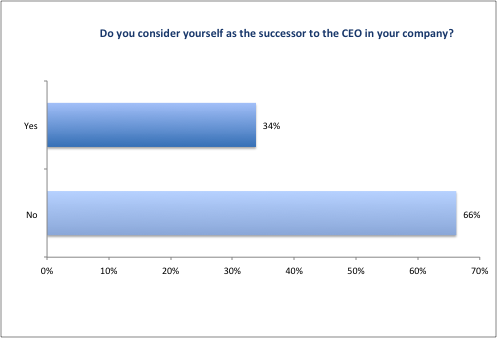 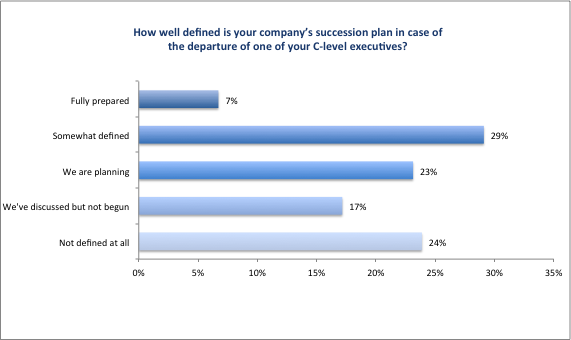 A majority (88 percent) of the CFOs in our survey had some or all of the human resources function reporting directly to them, and a majority (90 percent) of CFOs said that some or all information technology functions report to them. These majorities held true in our previous survey, as well. With the trend continuing that HR and IT report to the CFO in many companies, executive search firms, as well as HR and IT services providers, would do well to key in on the CFO. 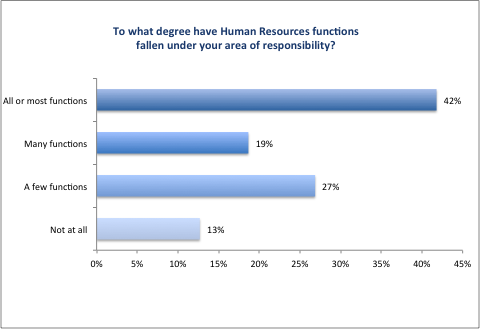 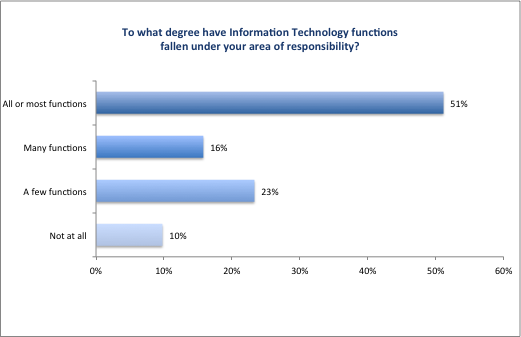 Almost 80 percent of our CFO respondents have never been approached about joining an outside board, while almost 90 percent of them said they would like to serve. This indicates that CFOs are a fertile ground for board searches. 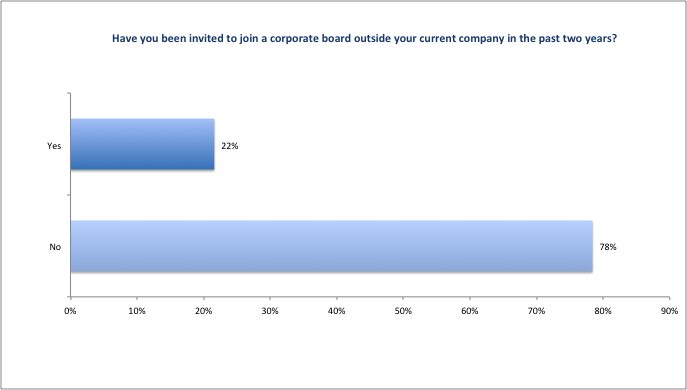 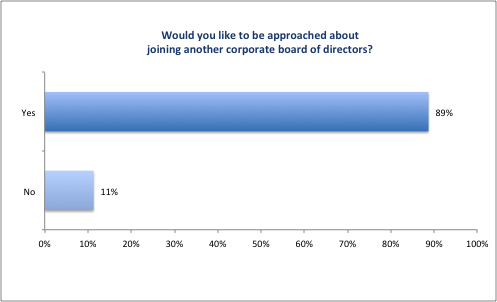 Only about 42 percent of the CFO respondents said they had accessed the retained executive search industry association’s websites (www.AESC.org and www.BlueSteps.com), and 35 percent had accessed our firm’s website (www.PearsonPartnersIntl.com). This indicates a disconnect between the number of CFOs who say they would like to serve on outside boards, yet have not been approached, and those who are taking proactive measures to ensure they are prepared for and considered for board search. 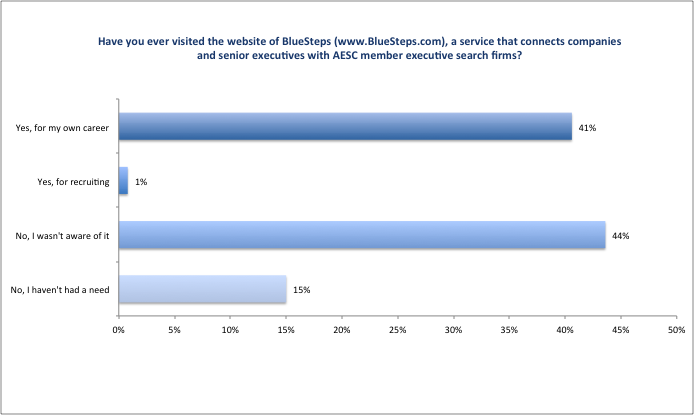 Almost half (43 percent) of our CFO respondents said they access one or more social networking sites daily. A third said they do so weekly. Companies that sell products and services to CFOs should develop sophisticated social media marketing campaigns to take advantage of this frequent, targeted traffic. 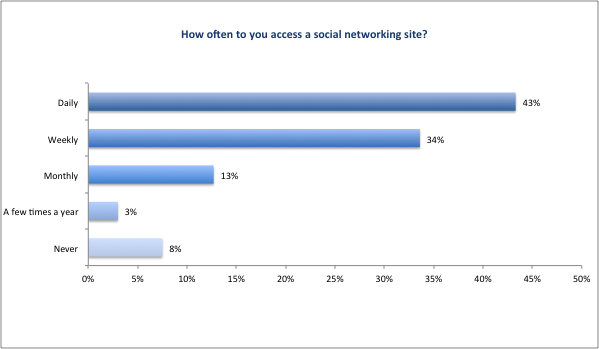 When asked who they expect to be the Republican nominee for president, it was fairly evenly split between Trump and Cruz, with about 44 percent selecting candidates who have since dropped out of the race. When asked which candidate would be their personal choice, the results were less in favor of either candidate (20 percent Trump and 15 percent Cruz), with a few more leaning towards Kasich (12 percent) and over half (53 percent) preferring candidates who have since ended their campaigns. This is an interesting observation on the candidates, especially in comparison with current poll numbers. 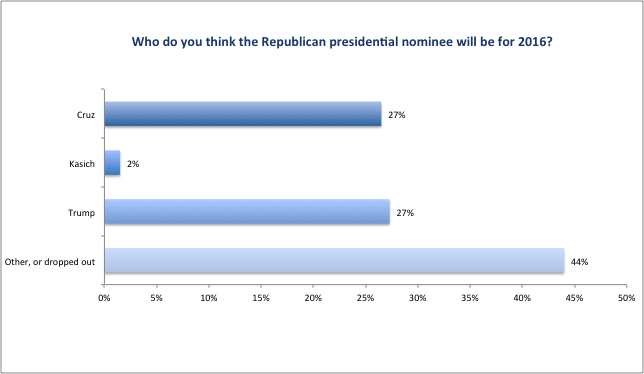 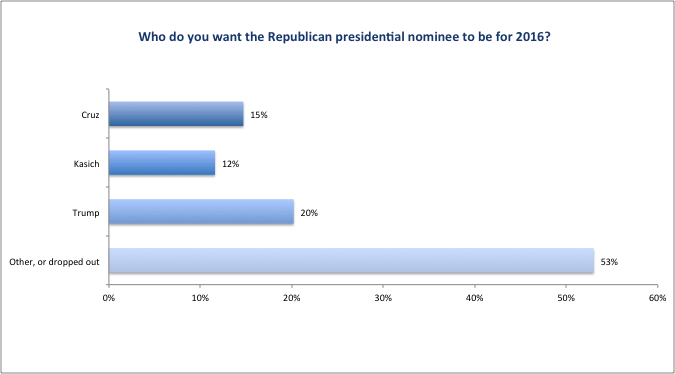 We asked the respondents what items would be on their agenda if they were president. The leading initiative (52 percent) was tax reform, and 37 percent said economic stimulus was necessary. Interestingly, almost 30 percent said they would initiate specific actions to combat domestic terrorism. 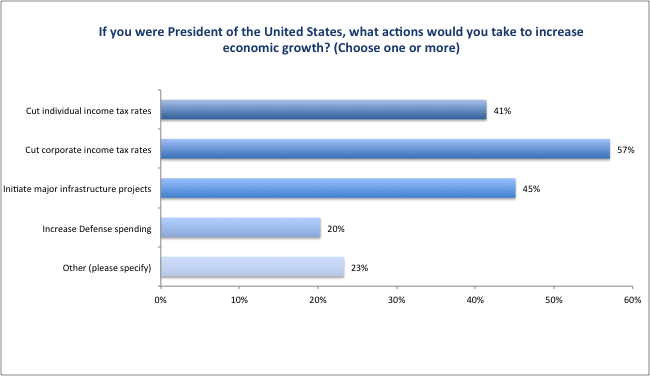 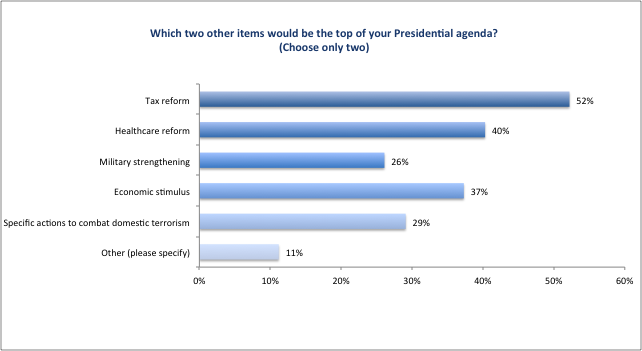 In somewhat of a contradiction, 65 percent of our CFO respondents said the outlook for domestic or homegrown terrorism would remain relatively isolated as it is now. 33 percent felt it would grow to become a major threat to the safety of U.S. citizens. However, only 31 percent felt that declaring war on ISIS/ISIL in order to make any threats a capital crime would be a useful strategy. 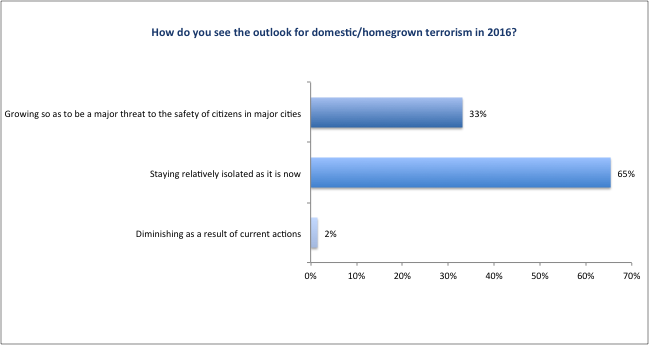 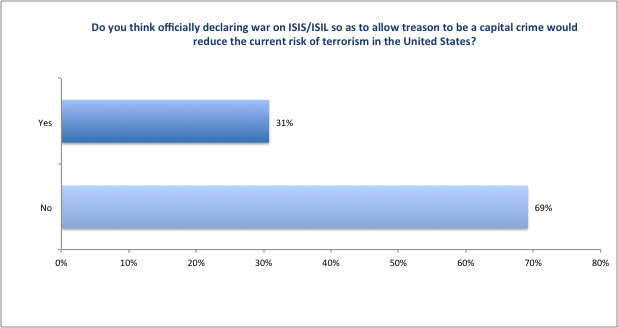 On the subject of China and the country’s evident economic slowdown, most (58 percent) of our CFO respondents felt that the principal impact would be a major slowdown by China in purchasing capital goods, thus negatively affecting economies around the world. One-third felt that the Chinese consumer would purchase fewer products made in the U.S.A. Also, one-third felt that China would soon devalue the Yuan by more than 10 percent. These sentiments indicate that China may have a considerable negative effect on the U.S. and global economy, and should not be dismissed. 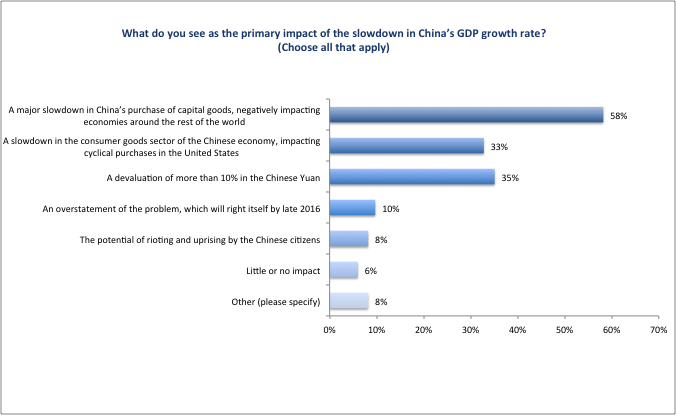 Are today’s CFOs adequately prepared to manage how the global economy will impact their businesses? More than half (56 percent) of our CFO respondents said they are making a conscious effort to become more knowledgeable about managing their businesses in today’s global economy. About a quarter (26 percent) said they are not making any particular effort, since they felt they were already prepared. It seems that providing educational products and services about the global economy to the CFO would be very well-received. 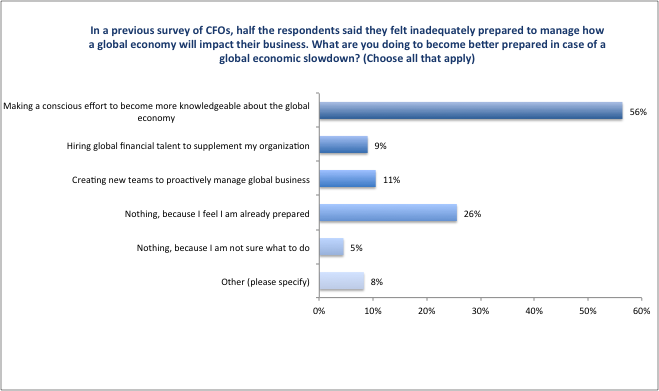